The DCO generates a wave running from 0 to -10V. To center this, I tried using two resistors and a 1uF capacitor, followed by a buffer. This works fine for higher frequencies, but at the bottom of the frequency range we get severe distortion, turning the straight lined saw wave into a slope.

Also, this arrangement won't work for Pulse signals as the pulse width has more energy at either top or bottom.

The square and pulse waves are a bit interesting as the amplitude CV does not have to run through a VCA. Instead, the amplitude is equal to the CV. This means that subtracting half the CV from the output wave will center it.

I've come up with the following, untested (and incomplete) circuit that shows my idea: 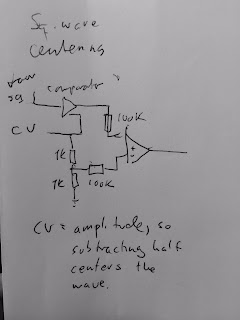 The DCO is nearly finished, but a somewhat serious problem remains. At low frequencies, the saw wave amplitude drops significantly - at the lowest frequency, 8.16Hz, it is almost half of the expected value.

Fortunately, this can be compensated for by increasing the capacitor charging current at the low end. Using an oscilloscope, I've measured what increase in DAC output voltage is required to get the correct amplitude. The plot of frequency vs dac increase (in dac steps, each step is 76.3 uV, which when placed across a 56k resistor equals a current of 76.3uV/56kOhm = 1.36nA per step) is like this: 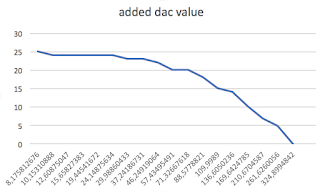 It shows that as the frequency drops, a higher and higher correction is needed to reach the correct amplitude in the available time. It also shows that the correction necessary is negligible for frequencies above 300Hz. 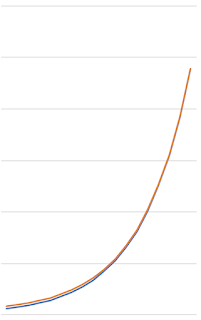 I am trying to find a function that fits what I see, to make it easy to add the necessary charge voltage to the precalculated dac lookup table. I've had some success with exponential regression but it doesn't quite fit.

But what is the effect I'm seeing? Why is a larger current than expected required at low frequencies, and why does it change?

The only thing I can think of is that we have a leak somewhere - some of the charge in the cap leaks out, or some of the current goes somewhere else or is turned to heat etc. As this effect goes on for a longer time the lower the frequency, it is a reasonable assumption which fits what I see.

There are very few parts involved in the integrator. A capacitor, a transistor and a 2.2Ohm resistor which I suspect is there to limit the current during capacitor discharging.

I tried removing the resistor, nothing changed. This leaves the transistor and cap.

A BJT like the one used in the DCO has a maximum leakage current of 15nA at 30V. It will be less at lower voltages, but not necessary propotionally less, according to this post. While I haven't tried to do any calculations, this is in the same range as the currents required to correct the error.

The Yusynth VCO, which also has an integrator core, uses a n-channel JFET instead of a BJT, and specifies a high quality capacitor - styroflex or silver mica, 1%. A JFET has a much lower channel-to-gate leakage current than a BJT, so this may improve things. I will try this, but it requires a slight redesign of the circuit.
Lagt inn av Joakim kl. 23:32 Ingen kommentarer:

I keep forgetting which is which of these. On the Rockheim pages (https://digitaltmuseum.no/011022857628/synthesizer) they show the sx-k100 and mention that the sx-k200 was launched at the same time. Also, they say that the sx-k100 is the one used by Knutsen & Ludvigsen, but I have to check this with my photos from the exibition.

Anyway, these are the facts:

The sx-k250 is labeled "PCM keyboard" in the photo of the cartridge bay here: https://www.olx.pl/oferta/keyboard-technics-sx-k250-analog-pcm-CID751-IDmTmUI.html

The sx-k150 is sold as a PCM keyboard on Gumtree.

The Jupiter 8 has two oscillator, and the output of oscillator 2 can frequency modulate oscillator 1.

I am not sure why both pulse and sqare are present as only one can be connected to the output at the time.

The x-mod input is tapped after the oscillator 2 waveform selector, to any of the osc 2 waveforms may modulate osc 1. X-mod has its own VCA The X-mod output (a current, as it is the output of an OTA) is mixed with the rest of the linear CV input, so x-mod is linear.
Lagt inn av Joakim kl. 03:09 Ingen kommentarer:

I want the XM8 filters to be as flexible as possible. I've studied the various IR3109 based roland filter implementations and the CEM3320 ones found at Electric Druid, and found designs for state variable filters based on both.

I am thinking about having exchangable filter cassettes, possibly with two identical filters per cassette. I tried to find a common control scheme, but right now I think that just using a shift register to serially control the filters will be the most flexible - that way variations can be software controlled instead of implemented in hardware.

I also want to have two filters per voice, configured in either series or parallel - one state variable and one permanent LP.

There seems to be a progression in the circuit through the years. Exact component values varies but all except two of the implementations use the same circuit for the filter part. The resonance feedback control and the cutoff frequency control circuits are quite different between the synths.

The JP-6 and the MKS-80 stand out however. The JP-6 has a state variable filter that allows both HP, LP and BP filters - the two first 24dB and the last 12dB. It would be easy to add 12dB HP and LP too, but this has not been done. The MKS-80, weirdly enough, has the same configuration as the JP-6, but hardwired to a LP.

The JP8 and the Juno 6/60 uses the exact same filters/component values, except for a few minor differences in the resonance feedback and cutoff frequency control. The JP8 can be tapped at 12dB or 24dB whereas the Juno is 24dB only. An interesting thing to note is that the Juno 6 datasheet indicates the CV for cutoff: 0.48V/oct.

State variable filter
I currently consider these implementations:
- The JP-6, with the added option of 12dB HP/LP
- The Elka Synthex CEM3320 based filter
- The CEM3320 multiple identity filter
- The Wasp filter.

I will start out with the JP-6 and moog ladder filter and go from there.

While drawing up various uses of the Roland IR3109 VCF-chip, I needed to make an Eagle part for the OTA used in the resonance circuit. My initial circuit was the one from the Jupiter 4 service manual, and it uses a BA662, IC17:

The service manual only shows a part using four pins while the BA662 has 9: 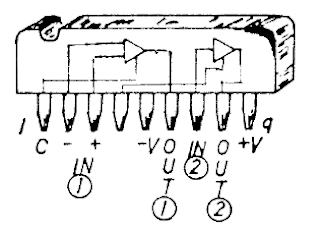 This shows that the BA662 is actually an OTA and a buffer combined into one package. The buffer is apparently not used in the JP-4, so how is it disabled?

The Juno-6 and Juno-60 service manuals answers the question: 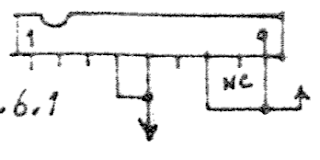 Incidently, the IR3109 itself is just four OTAs, four buffers and an exponential converter connected to the control of each OTA.
Lagt inn av Joakim kl. 07:02 Ingen kommentarer:

The XM8 just made its first ever sound - controlled by midi from a little phatty to the XM8 Voice controller, through the OMM and on through SPI to the DCO. Playing worked like a charm - pitch changes are delayed but that is to be expected since the SPI speed is set to a minimum right now. I had a lockup too, somewhere in the Voice controller code, but all in all I'm really pleased!

The tracking is awfull, I think I've used different intervals for semitones in the Voice controller code and the DCO, but it is very clearly playing semitones.