While looking at the Matrixbrute from Arturia I noticed that it has an additional waveform called the Ultrasaw. I have heard about it previously, but got curious about exactly what it was and started looking at the documentation.

Apparently it is two additional saw waves with the same frequency as the first one, but phase shifted. The phase shift varies and is controlled by two built in LFOs. One wave has a constant phase shift rate while the other one is user variable.

I began thinking about how I would create such a circuit. Then I discovered that Yves Usson, designer of the xxxBrutes, had actually posted the MiniBrute circuit diagram on his site Hack a Brute.

I have studied the circuit closely and it seems half of the design matches my initial thoughts, but how the wave is phase shifted is really quite simple and ingenious. It resembles how my saw sub oscillator works, by shifting parts of the original wave up and down.

The circuit looks like this (disclaimer: I do not own this circuit diagram, nor have I asked for the permission of Arturia or Mr. Usson to post it here. It is not in the public domain and is only reprinted here for educational use).


I have separated the circuit into three logical parts:
- The LFOs controlling the rate of phase change (left)
- The phase shifter (center)
- The wave mixer and volume control (right)

The LFOs consists of two main parts. To the left is a triangle wave oscillator. According to the MiniBrute documentation, the top one is fixed at 1Hz while the bottom one is user variable between 0.1Hz and 10Hz. The triangle wave design is the exact same one as the one in Texas Instruments' "Op amps for everyone", see Circuit 1-9 here or A.5.8 on page 446 of the original book. (PS: The book uses a unipolar power supply while the MiniBrute has a bipolar (+/- 12V) PSU).

To the right of the triangle wave oscillators is a triangle-to-sine wave converter. Its design is the same as the one in mr Usson's Yusynth VCO module.

I have not calculated the output amplitude of the sine converter. Neither do I know the amplitude of the input saw wave, but it would be a reasonable guess that it is +/- 5V, a common value in synths.

For simplicity, lets forget that the CV is coming from an LFO and instead treat it like a constant value. The control voltage (CV) desides how much we want to shift the saw wave back or forth. It does this by comparing the CV with the saw wave. When the rising input saw wave reaches the same value as the CV, thats where the shifted wave will start its cycle. This means that the phase shift is relative to the frequency of the input wave, it stays the same (in percent or degrees) even if the input saw wave's frequency changes. (This, by the way, was what I got right in my initial idea).

When the circuit has found where it wants to reset the saw wave, it sort of "chops off" the top of the input wave and moves it to the bottom of the wave instead. It then re-centers the wave for an even amplitude, and voilà, the saw wave has been shifted.

The detection and shifting happens in three sub circuits that are then summed to get the shifted wave:
1) The original saw wave
2) A comparator that compares the saw wave and the CV
3) An inverter that inverts the CV

Number 1 and 3 are simple to understand, but number 2 requires a bit of explanation.

In our circuit the saw wave is connected to the negative terminal and acts as Vref:


Here is a graph that shows the how the input saw wave and the CV relate to the output of the comparator:

The output is scaled by the 220kOhm resistor and the diode at its output. PS: I have not thought enough about what the diode actually does. It may chop of the negative output from the comparator. For now we'll assume that the output is bipolar and scaled to +/- 5V.

Now, this is where the magic happens. The output from the comparator is summed with the original saw wave and the inverted CV, and out pops a shifted wave. Lets see how.

First, lets see what happens when we sum the saw wave with the comparator output

Summing the saw wave and the comparator output effectively moved the blue parts down and the red parts up, in a way that makes the lines align again. the fourth graph in the figure above shows how the result (red) is phase shifted in relation to the initial saw wave (grey dotted lines). It is however also shifted vertically.

So how do we fix this? Take a closer look at the first graph in figure 4. The top corner of the red triangles are what becomes the top corners of the resulting wave. The top corner should be at exactly 5V in the output. The comparator output will move the tip upwards 5V, but since the corner starts at a positive voltage instead of 0V it will end up higher than 5V. Thus, we have to move it back down a bit. How much? Well, things had been ok if the corner was initially at 0V, But it is at CV volts (remember, that is the definition of the corner, the intersection between the CV and the saw wave). Thus, we have to move everything downwards by CV volts: 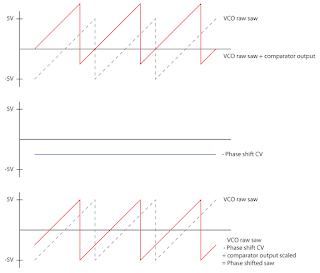 The last graph in figure 5 shows the result - the saw wave has been phase shifted. The two operations in figure 4 and 5 plus the scaling of the comparator output happens simultaneously in the summer of the Phase Shift blocks of the circuit.

Finally the two saw waves are summed and sent through the SuperSaw (!) amount pot RP1A, which acts as a voltage divider scaling the output to between 0 and 100%. The SawAnimator out is then mixed with the raw saw wave elsewhere.
Lagt inn av Joakim kl. 13:37 Ingen kommentarer:

I've been working a lot on the xm8 lately. All the work has been gui related, and now I have a working matrix, virtual controllers, setup for nodes, controllers, links and more. I am working on a visual tool to create whole control surfaces and it's looking pretty good. No major feature is missing except for a gui for wifi configuration. I still have a bit of work to do on input configuration serialization (and deserialization on the microcontroller) but things are coming along nicely. Of course there are tons of things to add, like voice assignment, arpeggiator or sequencer functionality, cloud storage etc, but these aren't necessary in the initial version.