Way back in october 2017 I did some research on the BA662 clone. To my surprise I got massive distortion when trying to get unity gain out of it. This made me fear that my Xonik Linear VCA had the same issues.

Yesterday I simulated the circuit: 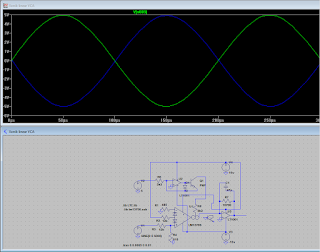 At 5V CV and 5kHz sine input, I got unity gain with no visible distortion. I then doubled the frequency: 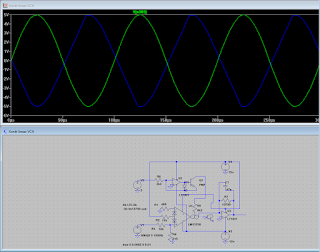 I still didn't get the kind of distortion I expected, but I got SOME distortion (see the blue graph).

Now, this isn't good. I tried both with and without the output filter cap, no change there.


Today I breadboarded the circuit, first without the output cap. The results were very promising. I could see no visible distortion, not even at 20kHz: 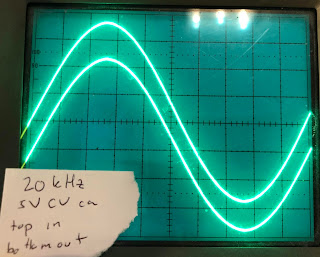 Changing to a triangle wave at 40kHz showed a slight distortion at the top of the curve: 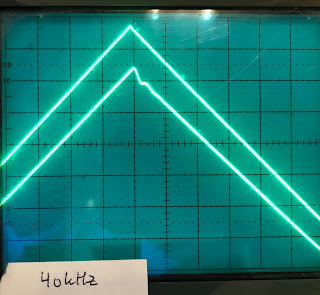 Changing again to a square wave showed severe ringing on the output: 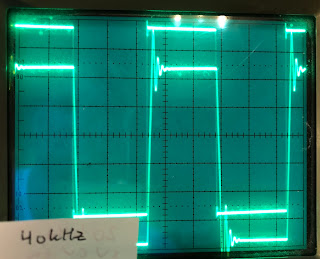 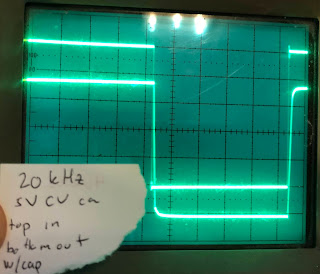 It worked wonders for the other waveforms as well: 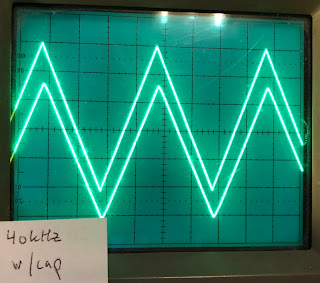 I then experimented with a lot of other cap values, here are some:

It seems that 33pF is still the best match (or 18pF + 10pF if one wants a tiny ring instead of a rounded edge). It has to be said though, that this is not a very scientific method, and it has a huge error factor in that the breadboard itself may contribute massively, making the capacitance higher than expected.

Just to make sure that I wouldn't get a significantly better result with a lower CV and higher compensating gain, I replaced the CV resistor with 6k8 and the output gain resistor with 22k (I did however not replace the cap. The filter frequency is 1/2*PI*R*C (presumably), so in doubling the R I also halved the output frequency, leading to more rounded corners: 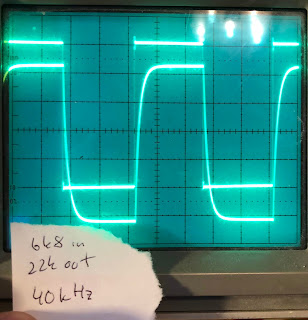 I only realized this right now while writing this post. Still I think the results are quite good, the selected values seem ok though I have to test with both a 33pF and a 47pF cap (specified in the circuit) on the final board to see which one is best.

Anyway, my conclusion is that the Xonik Linear VCA is still a good choice.

I finally got the midi based bootloader for the mpg200 up and running. I have yet to test it with the mpg200 code but a short test program uploads fine. So happy right now :)
Lagt inn av Joakim kl. 14:27 Ingen kommentarer:

Summer is always kind of productive for me. While off on summer holiday to the western parts of Norway, I get time to do some electronics work. This time I've drawn up and ordered a 16 channel sample and hold circuit (DAC mux) to replace the 32 channel one used in the prototype. This one is easier to place and makes it possible to use only 16 channels for parts of the synth.

I also did a v3 of the linear VCA. This time, as for the first version, the trimmers are off-board, but the components are placed on both sides as in v2. The whole card is sort of a double width DIL thingy with the pins for one VCA on one side and the other on the other side. I imagine it possible to place it in a socket and have other parts of the circuit below it - we'll see. 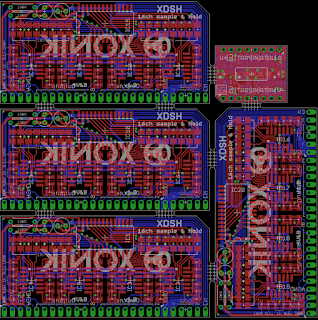 Finally, I did a ring modulator based on the one from yusynth.net, which in turn is almost entirely a copy of the one in the datasheet. This one uses a surface mount MC1496. The circuit and board are finished (but untested), including logo. 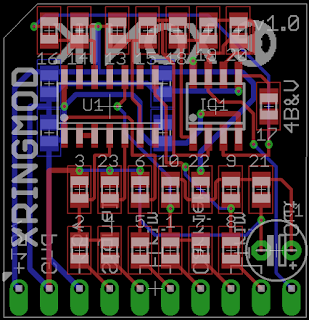 Oh, and I have written a midi/sysex-based bootloader - it's almost finished. I will feel much better if I can remotely update any MPG-200 I sell. The bootloader is very simplistic and does not have any flow control, so sysex uploading must be done through a program made by me. Still better than not being able to update at all.
Lagt inn av Joakim kl. 03:46 Ingen kommentarer: