The VCAs in the  ETI vocoder use a voltage to current converter that is slightly different than what I'm used to. This post tries to understand what is going on. It may be wrong, so do not use the findings without verifying them first.

The transistor in the vocoder has its base tied to ground, collector connected to the control pin of the LM13600 and the emitter to the output of an opamp (and a trim pot) through a resistor.

Unlike other converters I've seen, it does not have the transistor inside the feedback loop of the op amp.

I suspect that the converter does not rely on the \(\beta\) or Hfe of the transistor, it only has to be high enough. I believe that what is important is the relationship between \(V_b\), \(V_e\) and the output voltage of the op amp.

I've chosen the VCA in the internal excitation circuit as my reference when analysing the circuit.

R34 is a 10k resistor, you can see these in most all designs using the LM13600 OTA. It's most likely there to protect the lm13600 from self destructing - the maximum control current of an LM13600 is 2mA. See my post on the Xonik VCA for an explanation of its value.

So how do we calculate the collector current (which is what controls the OTA, Iabc)?

Here is a page that explains how a transistor may be used as a constant current source:

What the page above fails to mention is that the bottom of \(R_e\) must be connected to ground, or at very least that \(V_e\) is the voltage across \(R_e\).

Now we can calculate the emitter current = current through \(R_e\), which will also be approximately the collector current if \(\beta\) is large:

What does this mean

Well, first of all, Ie is independent of the transistor \(\beta\), which means that we can replace the BC212L transistor with something else without having to look too hard for a perfect match.

Second, we can calculate the maximum current through the base. Knowing that


The vocoder uses a +/-12V power supply. Thus, the maximum output value of the opamp is +/-12V (in practice it will be a bit lower than this, and the vocoder may even be designed to use an even lower control voltage, but the absolute theoretical maximum is +/-12V).


Thus, when selecting the transistor to use, we need to make sure that it has a maximum \(I_b\) higher than this when entering its \(\beta\) in the formula above.

As for the trimmer potentiometer PR1 and its associated resistor R33, I assume they add a constant current that trims the 0-point of the VCA.

The potentiometer acts as a voltage divider, so the maximum current through R33 will be:

I suspect that the diode D5 in the op amp feedback loop is there for this reason:

The voltage to current conversion formula will then be


where \(V_{in}\) is the input voltage at the positive opamp input terminal, i.e. the control voltage.

I tried breadboarding the circuit to confirm my suspicions.

R31, D5 and IC8b form what is called a simple precision rectifier, see this wikipedia post: https://en.wikipedia.org/wiki/Precision_rectifier. As we tap the output at the opamp output instead of at the negative input, we should see the 0.6V offset.

My measurements clearly showed that this is indeed true. The positive input and the output of IC8b follow each other closely, with a difference of 0.6V.


Also, to confirm that this is indeed the precision rectifier from the wikipedia article, once the input goes below 0V, the output immediately drops to the negative rail - no surprises there. As the input is connected to the previous rectifier however, this doesn't really matter, the CV will never be negative.


As for R31, removing it makes the circuit act like a normal buffer. Increasing the value from 3.9k to 12k has no effect at all. Replacing the diode with a wire also changes the circuit back to a buffer.

There is a mismatch between the schematics and the parts list for the internal excitation module.

where R is the resistor in the feedback loop of the op amp.

The two circuit parts sum up channels 1-9 (for the <2kHz input) and channel 13 and 14 (for the >4kHz input). For the sums to be comparable, the max sum of each parts must be the same.

These are similar enough to be compared.

The low-pass filter is there to make sure the Vocoder only reacts to slow changes in envelope amplitudes. It is reasonable to assume that they should be roughly the same. The capacitor has been matched with the feedback resistor (R39, R40), which in turn was selected to give correct gain as described above.

Transistors in the ETI Vocoder

Many of the transistors in the ETI vocoder are either hard to find or very expensive (or both). I am trying to figure out if alternatives are available.

Q1 is definitely replaceable, probably with a 2N3904. It only acts as a logical inverter together with R20 and R21. It is similar to the one found here:

Not sure if we have to change the resistor values, but probably not.

Q2 is a voltage to current converter. I am not entirely sure how it is meant to work so I cannot say for sure right now what parameters to look for. The same converter circuit can be found in the analysis/synthesis section, so if one is solved, both are solved. I think looking at the exponential converter theory I've written earlier may solve some of it - the way it works is that the base is tied to ground while the emitter is connected to the output of IC8b which probably follows the envelope follower. D5 is similar to what I have in my Xonik VCA. R33 and PR1 probably adds a constant current to trim offness or similar.

Q3 and Q4 control two switches. Again, I believe they are considered binary - the output of the comparator is either high or low and the switches are also controlled by high or low voltages. We should definitely try 2N3904 and 2N2906 here.

Update: I've confirmed that Q2 is not depending on Hfe and may thus be replaced by a difference transistor (see my post on the ETI voltage to current converter). The BC557 has the same pin-out (CBE, PNP) and at least the 557B has a Hfe in the same region.

As for the BC182L, it seems that its pin out (ECB, NPN) is harder to find. However, the BC182 is still available from Farnell and RS Components (though not mouser). If the circuit board is redesigned, using a different transistor will be problem free.

As for the BF244 N-channel JFET, I have yet to find a replacement. It could possibly be replaced with a J112 (which also has interchangeable source and drain). I would have to look at the exact function of the transistor but I suspect that it is only used as a switch. The difference between J111/112/113 is the gate-source cutoff voltage, the zero-gate voltage drain current and the drain-source on resistance. The cutoff voltage for the BF244 varies widely, more than between the various J variants, as does the zero gate voltage drain between the versions (A,B,C) of the BF244. The vocoder article does not specify a particular version of the BF244 so this may not be very important either.

As I intend to use lookup tables for the DCO frequency and amplitude, I started looking for ways to do linear interpolation of the values in such a table to keep the number of entries low.

I may have mentioned it in a previous post, but I bought an early 80s digital sound creation book, and it has a thorough description of how to do this fast and efficiently. It is particulary space saving for symmetric waves such as sines but may be of some help even to me. Here is the text (for me to remember): 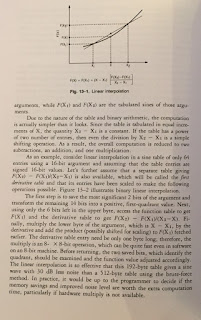 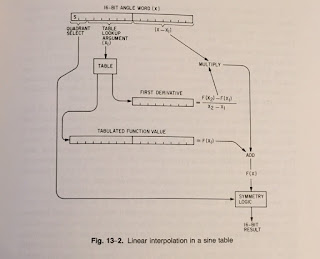