I have incredibly bad news to bring to the world at the start of the year. To my horror, I've discovered that the switch between midi and PG-200 modes on the JX-3p is scanned like any other key on the front panel of the JX-3P. Using my logic probe on the scan line while turning both a dial and playing notes at the same time, I have observed the following: 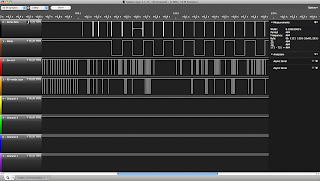 In this screenshot, the first waveform is the serial data (midi/pg-200), the second is the mode-select signal (switches between midi and pg-200), the third is the scanning - notice the big period of blackness in the middle of the screen, here the JX-3P has been working hard and not had the time to scan for changes, resulting in a dropped midi or pg-200 byte. The fourth is the result of the scanning, whenever a scan occurs and the mode select signal is 0, a 1 is returned to the microcontroller - this is seen as long stretches of 1 on the fourth line, in the parts where the scanline still changes rapidly.

This is by far the biggest problem I have faced while working on the mpg-200, and I am afraid this one cannot be solved easily as it is directly related to the way both the hardware and firmware of the JX-3P is built.

I have tried using a "settle time" after changing the mode of about 100ms, that seems to work fine for most hand turned potmeters etc, as long as one does not play fast and turn rapidly at the same time. However, even this means that one has to wait at least 100ms after changing a controller before a new note is pressed (or released). If not, the note will be delayed or not played at all.

So - one can do filter sweeps as long as you hold down the same note, but rapidly changing parameters while playing will probably not work very well :-/


This seems to me like a show stopper for much of what I wanted the mpg-200 to be. It can still be used for tweaking the JX-3P from a daw, but prevents much of the automation that would be cool.