Before new years I tried hooking up a simple mixer to mix four saw waves. The mixer consisted of half of a TL072 and five 47k resisors.

While I DID get a mixed output, it sounded worse for every new oscillator I connected. Today I hooked up an oscilloscope to try to see if I could figure out what was going on, and in fact I quickly realized the problem.

When mixing two +/- 5V signals with unity gain, they will occasionally reach +/10V. Mixing three oscillators will result in +/-15V, and four results in +/-20V. The problem is of course that above 14.8V (or thereabouts), the op amp starts clipping, chopping of the tops. This does not sound very nice at all.

By reducing the gain resistor to 12k, the sum of the four oscillators will be within the original +/-5V. And indeed, the output sounds so much better! Now I'm closing in on the buzzing, swarming multi-saw sound I am looking for :-)

I have to rethink the oscillator mixer for the 7-saw though, to prevent clipping at all times. Next up is breadboarding the mixer again :-D
Lagt inn av Joakim kl. 06:44 Ingen kommentarer:

How to make cheap front panels

Due to our recent car purchase, I expect money to be a bit tighter than usual in the next months. I still need some cool front panels for my upcoming polyphonic/super saw synth. I have therefore been looking for ways to create decent panels at a low price instead of using Schaeffer/front panel express or similar services.

Today I completed the first prototype, a panel for the 8-saw oscillator, and this post explains the process in detail.

I have the luxury of co-owning a Silhouette Cameo cutter with my wife. This machine, while meant for scrapbooking and cutting vinyl for arts & crafts, works perfectly for cutting all sorts of soft materials. While you can get away with just an x-acto knife or similar, the machine makes the job so much easier and the end result much better.

I got my perspex from Biltema here in Norway, but you can get similar stuff elsewhere. Make sure it is 2 mm, any more and you may not be able to attach the mini jack sockets, any less and the panel will bend too easily.

The photo paper I used is called Skyhorse Premium Quality Glossy Photo Paper, 130g, self-adhesive cast-coated. I got it off ebay in the UK. It is rather thick, and the ink I use (Canon CLI-55xx) is not absorbed well enough to protect it from wear and tear - it smudges easily even after drying for some time. This is however no problem as long as the paper is covered with the adhesive transparent plastic

The adhesive plastic I use is the kind used as a dust cover on books. It comes in glossy and matte finish, I've chosen the glossy one.

First I designed the panel in Illustrator. When doing this, I added cross hairs to all circular components, to tell me where to drill holes. When satisfied with the design, I made a copy of it and removed all but the outline and cross hairs. I then printed this design onto a piece of the adhesive photo paper, trimmed the edges using a paper cutter and attached it to the perspex. To make it easy to remove after drilling, I put the paper on top of the protective film that covered the perspex.

I then drilled all holes using a 1 mm drill bit in a drill press. It's much easier to get an accurately positioned hole using such a small bit first. Remember to also drill holes for any key tabs on the potentiometers.

Some of my holes are very close (1 mm) to the edge of the perspex. I drilled these first, in case they crack the perspex, so that as little work as possible is lost. Be very gentle and do not put a lot of pressure on the drill.

I then drilled 3 mm holes, even in those places where the end hole is supposed to be larger than that - still to get a better accuracy.

Then I used a conical drill bit to drill any holes larger than 10 mm. Finally, I drilled any remaining 6 and 7 mm holes.

After drilling all the holes I used a scroll saw to cut the edges and straightened them by sliding the panel along a metal file. This is the end result:

Note that I tried to drill the holes for the potentiometer key tab only partially through the perspex. This was a bad decision as the plastic extrudes slightly, making the hole visible on the front even after attaching the photo paper. Had I drilled it all the way through, it would probably have been invisible.

After creating the raw perspex panel, I printed the panel design onto the adhesive photo paper.

The Silhouette cameo comes with a plugin for Illustrator that lets you add what is called registration marks to your drawing. Later, when you want to cut out parts of the design (holes for pots etc), the Cameo recognizes these registration marks and knows where the design is located on the paper. The plugin costs $40 but is well worth the money.

Next up is to cover the panel with the transparent plastic to increase its durability. I decided I wanted the edges to be well protected as well, so I came up with a way that let me put the plastic around the edges and onto the back. If you do not need this, just put plastic all over the panel and cut along the edges of the front panel (after creating holes for the pots etc).

In my case, I had to cut away parts of the photo paper around the edges of the panel so that the plastic film would not stick there. As the photo paper already has a non-stick backing paper, you only need to remove the photo paper itself. However, it is hard to cut through the top layer only, so I did instead cut all the way through:
After cutting two grooves, I turned the paper over and put some Scotch magic tape over it to keep it in place. I then did the next side the same way etc: 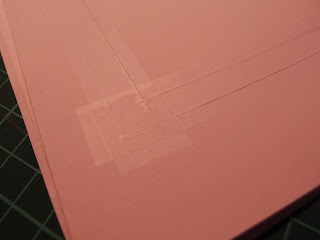 Finally, I removed the photo paper from the parts I had cut out: 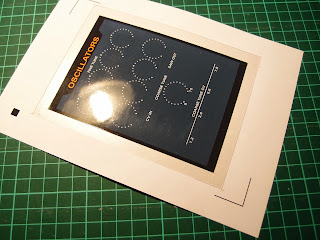 I could now cover the whole paper with plastic film: 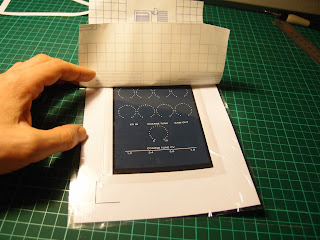 After covering the paper, I attached it to the cutting mat of the Silhouette Cameo: 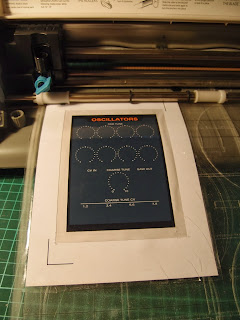 Based on the same Illustrator design, I created outlines for the potmeter holes etc in the same position as the previously created cross hairs. I made sure to make the holes about 1 mm larger that the holes I drilled, as the silhouette is not accurate enough to get a perfect hit. The design is then sent to the machine and "printed" onto the panel. Due to the thickness of the plastic and paper combined, I had to set the cutting knife to 8, and even this proved to be a bit too little in some cases. Ideally you want to cut all the way through the photo paper but not through the backing paper. 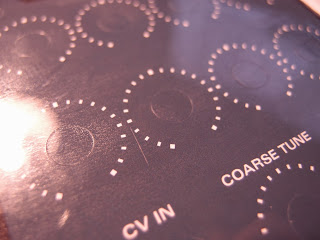 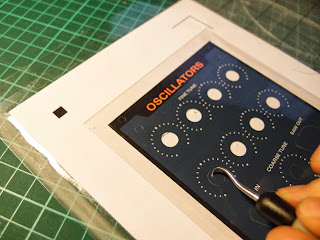 Then I cut off the edges using a paper cutter. The corners are cut diagonally to be able to wrap them around the edges 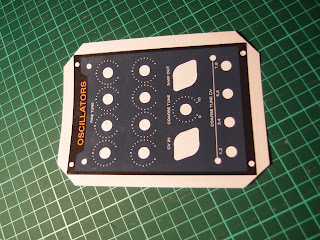 Finally, I removed the panel from the backing paper and attached it to the perspex 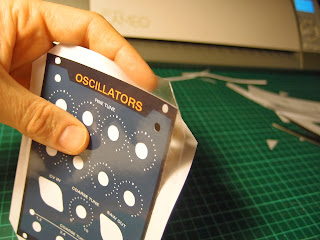 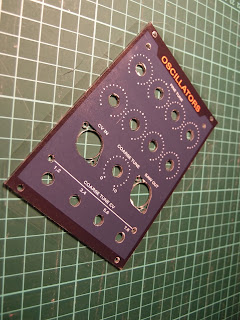 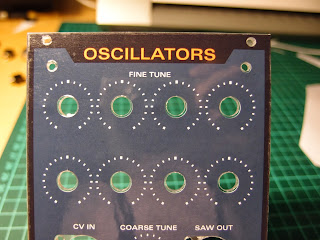 After attaching the front panel components (knobs, jacks etc), all edges are covered and the result is quite pleasing. The plastic is slipping slightly from the photo paper close to the edges, this will probably not happen if you do not fold the plastic around to the back. Also, when tightening the DIN-jack sockets the plastic bulges slightly, this can possibly be prevented by cutting the plastic closer to the screw holes. 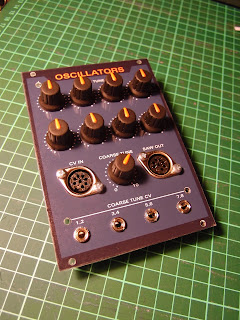 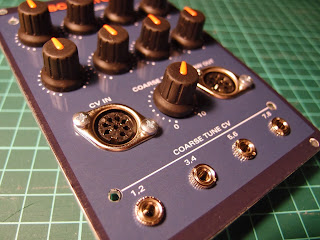 All in all I think the result is very good, especially considering the price and the time it took to create it.
Lagt inn av Joakim kl. 08:21 1 kommentar: