Following the debugging of the revision 1 board, I've updated the quad saw PCB. It now has a coarse tune input (oscillator 1+2 and 3+4 are tuned together) with the posibility to add a jumper wire directly to -15V if one does not want a coarse tune input.

I have also changed the power input to a four pin version that includes panel ground (Oakley Sound Systems-style) and turned all connectors 180 degrees.

Oh, and most importantly, the outline-corners have been rounded off ;-) 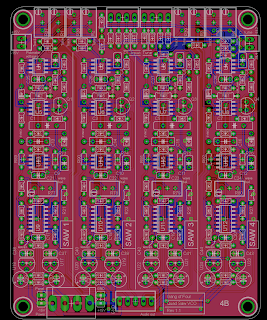 Oh well - some errors are to be expected

While trying to tune the oscillators I discovered two errors. They are both easily fixable but important. First, I had used 100k instead of 10k pots for the wave balance pots, which means it was impossible to get a good balance around 0V. I replaced the pots and it worked very well.

Second, both this quad oscillator and my stock yusynth oscillator seemed to have a very high-pitched response to 0V CV. Only after reading through the text on the yusynth.net site did I realize that the coarse tune pot is not centered around 0. Instead, the maximum counter clockwise setting is 0 and the max clockwise setting is 10 (not sure if that means 10 octaves though). This means that in order to function "normally", I have to add a 270k resistor connected to -15V to my design as I have no coarse tune pot. It's not a big problem but one that will have to be adressed in a version 2 of the oscillator. I should also concider adding either an octave rotary switch or at the very least an octave/coarse tune input. As I have run out of space on the PCB, I think the pot will have to affect all oscillators, not only one, meaning all four oscillators will be tuned to the same range. Two four-oscillator cards could of course be tuned differently though. I may even be able to squeeze in two inputs so that groups of two oscillators may be tuned differently.

One final note: I have used 100k resistors for the wave amplitude amplifier input. Mr. Usson states that one may have to use an 82k resistor here and I can see why. My saw wave output has a +/-4V amplitude instead of the expected 5V, swapping the resistor may help.

After a false start this morning, I managed to get my quad saw oscillator card up and running tonight. At first, it seemed like nothing worked, but after switching to another set of oscilloscope probes and probing from the start to the end of the circuit, it turned out it was working after all. Great success! :-D

Two versions of the sub oscillator under production

Last night I sent two prototype versions of the sub oscillator for PCB production. The "normal" single sub oscillator with the cool inverted saw thing, as well as a stackable quad sub oscillator that can be used for my 7-saw/polyphonic modular project. The quad version will need a separate controller card as well, to be able to select the type of wave and polarity etc for eight sub oscillators at the time.

If successful, the single sub oscillator is destined to be the first official product from Xonik Devices, my new brand. All future projects will be released under this name.
Lagt inn av Joakim kl. 12:27 Ingen kommentarer: