Today I finally had time to do some photoresist developing and etching to try to figure out a sweet spot before doing all the vocoder cards.

I got some AA16 cards from C.I.F at Farnell and got to work.

After reading a lot about various methods, I landed on using Sodium Metasilicate as the developer. Incidently, I had some laying around. More specifically, I had a 25g sample of the Mega Electronics universal developer, but after reading the datasheet I figured it is what I wanted.

For etching I used "Etching power for PCBs" from Scan Kemi that I bought last time I did any cards. It seems it is mostly sodium peroxidisulfate (sodium persulfate).


I tried various exposure times as well as developer strengths and development time. Three of them failed and three were closer to success

1) 2 minutes of exposure, developed in a 13g/2.5dl solution. This was not long enough, the developer had a hard time doing much at all.

2) 3 minutes of exposure, developed in a 25g/2.5dl solution. I left the card in the developer for three minutes. When etching, the resist floated away.

3) 4 minutes of exposure, developed in a 13g/2.5dl solution. Some of the traces were too thin and broke. 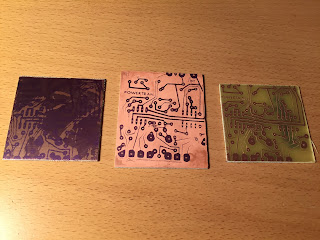 4) 3.5 minutes of exposure, developed in a 13g/2.5dl solution for 5 minutes. When etching some of the tracks got too thin and some were not etched enough 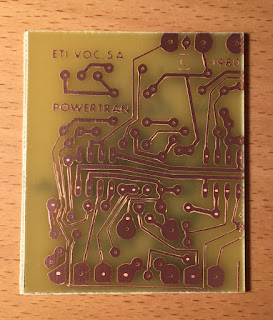 5) 3 minutes of exposure, developed in a 13g/2.5dl solution. The development time was a bit on the short side so some resist still stuck and was etched away later. The result was probably the best one of all the trials. 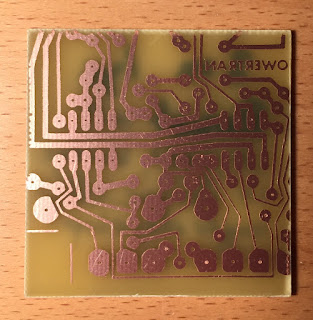 6) 3 minutes of exposure, developed in a 25g/3.5dl solution for 1m 30sec. The solution was a bit warm as the additional water was hot when added. This turned out almost as well as the previous one but with slightly thinner traces and one short circuit. 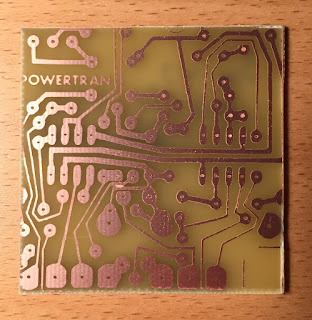 My conclusion is that 3 minutes of exposure seems perfect, and that I should probably retry the 13g/2.5dl developer solution but leave the cards in a little longer.

The etching times was around 10 minutes, depending on the heat of the water. I did the etching in a small plastic box in a bath of hot water which started out at 44 degrees celcius. The recommended temperature is 50 degrees.

I found this info in a forum, it  clears up some of the confusion:

"Well,,, in Japan, "2SK30A" is a most common and very popular.
for low-frequency use, especially audio-use.

Its current part-number is 2SK30ATM. perfect substitute of "2SK30A"
TOSHIBA only carried out the minor change.

http://www.sm.rim.or.jp/~konton/Museum-7.htm
The minor change of "30A"was carried out in this way.
You'll notice the versions since 1970s.

=====
In the case of TOSHIBA,
The alphabet added to the end expresses an Idss ranking.
You can specify it certainly.

What to search for to find photo sensitive copper clad boards for PCB production:

I already own a (huge) UV-light box that I haven't used for a number of years. My previous UV experiments have all been under a large bulb, so I didn't what to expect. 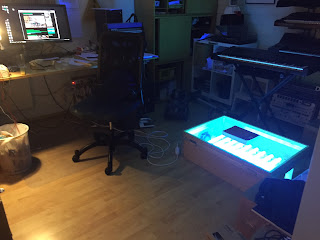 The way the film works is this:

The film is negative, meaning that any parts not covered by something when it is exposed to light will be "cured" and turn into resist. The remaining parts that were covered during exposure can be washed away during developing.

A friend of mine had already printed some templates on transparent plastic. Though they are meant for positive resist, they work well for the experiment. I put two copies of the same print on top of each other to better block the light.

Start off by sanding the copper clad board with a very fine sanding paper or a scotchbrite sponge to make stuff stick a bit better. Clean off with some alcohol or acetone or something similar to remove any grease.

To remove the bottom plastic, I used a trick I found here - put a bit of sticky tape on each side and rapidly rip the sides apart (it is important to do this quickly). I turned down the lights in the room while doing this, remember, you're working with photo sensitive film.

Then cover the copper side of the board with the film, protective plastic up.Try not to touch the film with your fingers to prevent greasing it up.

The film must be fastened to the board using an iron at a very low temperature (or the plastic will melt and warp) or idealy a laminator. I tried an iron with ok but not extremely great results.

Once the film sticks, put the transparent foil face down on the UV light box, put the board on top and something heavy like an old mathematics book on top of that to keep everything nice and flat.

I tried various exposure times from 2 to 6 minutes. 2 minutes turned out best, the others had cases of light leakage - ragged edges, thinner lines than on the foil etc. My UV light box has 10 powerful tubes and is very powerful so times will be different with other equipment. 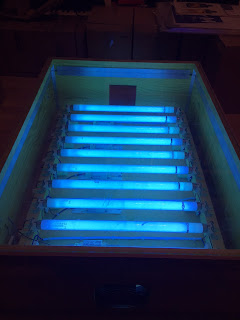 After exposure I put the cards into what I think is a 1:100 mix of sodium carbonate and water (but I got it in the same package as the dry film from a vendor in china, so I'm not really sure). The development time was three minutes. After two minutes I started brushing the non-exposed parts with a coarse paint brush to rub off the film.

I haven't tried etching the boards yet so I don't know how well the film sticks. It looks and feels very sturdy though.